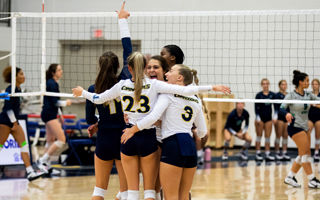 Gulf Coast needed more than just the regular conference schedule to earn its place in this weekend's Sun-Lakes Conference Tournament in Lake City, with the Commodores knocking off South Florida State in a one-game playoff in Palatka to earn the seventh and final bid to the tournament.

Though it took a late surge to get into the tournament, Gulf Coast coach Scott Allen's team doesn't go in simply grateful to make an appearance. The Commodores (12-11) come in winners of four of their last five matches, riding a wave of positive momentum thanks in part to an increasingly healthier roster.

"Yeah, we're playing a lot better right now, but a lot of it is due to getting everybody healthy," Allen said, referencing players such as freshman setter Peyton Chambers and freshman middle Aaliyah Baker, both of whom have recently returned after missing much of the season with foot and thumb injuries. "Getting everybody back healthy has been a big part of that run we've been on.

"We had a game against Coastal (Alabama) East (on Sept. 27) where we had six players who were out due to injury or being sick so having those players get back healthy and getting some practice time to develop some chemistry together and figure out what everybody's roles will be has been a big part of it. We feel like we're playing well right now, like every time we practice we're getting better. Hopefully we'll go out and play with a lot of energy on Thursday."

That Thursday matchup will come against Lake-Sumter State (20-5), which finished second in the Sun-Lakes Conference during the regular season and swept the two regular season matchups with Gulf Coast, winning six out of seven total sets.

Allen said he believes the Commodores are playing better now than they were going into either of those two meetings, the last of which came Oct. 8 in Leesburg, but he knows that even if they're on their best game it's going to be a tough battle against one of the state's best teams.

"I would say it was a combination of them being really good and us playing poorly," Allen said of the two losses. "Maybe it was the fact that they're really good that made us look bad, but we felt like on our end there were a lot of things we were not doing well up to that point. We felt like we couldn't quite get on a run, and they made us look pretty bad. They're a really good club, they serve tough, they have some good setters, and the key for that team is their outside hitters are very strong attacking from their left hand side.

"We definitely feel like we're playing better than we did (in the first two meetings), so we feel like we can at least have a better showing this time."

The good news for the Commodores is that even if they lose Thursday, their season is not over due to it being a double elimination tournament. The bad news is if they do lose they'll have to come back on Friday and win three consecutive elimination games to make it to Saturday where they would have to win another game to advance to the final, which they would also have to win in order to advance to the national tournament Nov. 18-20 in Cedar Rapids, Iowa.

A win Thursday would create a much easier path, with the winner needing to take just two more victories to get to the championship round.

"If we beat that 2-seed, the way I look at it is we'd be stealing their seed and basically we'd be the No. 2 seed then," Allen said. "If we can pull that one off we'd have the second-easiest road technically."

It's a tall task, but it's not like Gulf Coast hasn't been able to compete against the Sun-Lakes' top teams. The Commodores swept the No. 3 team in the league Pensacola and lost a close five-setter earlier this year against top seed St. Johns River State. With the team healthier than ever and playing its best volleyball of the season, Allen said there's no reason to think his team is incapable of making a deep run.

"Everybody is healthy now and we're playing about as good as we can and I think we're playing pretty good," he said. "We beat a really good Pensacola club and swept them this year, so we have the ability to beat really good teams in our conference. I don't feel like we're outmatched. Going off the record, they're the better team for the season, but we're playing really well and I feel like we have a puncher's chance."