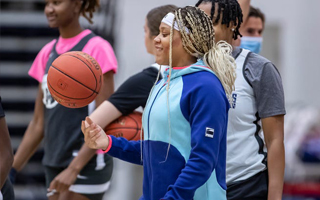 With little over a month to put his first recruiting class together at Gulf Coast after being named head coach in mid-July, Rory Kuhn had his hands full in finding the kind of instant-impact players that could help the Commodores compete in the nation's best JUCO conference.

Kuhn may have found two such players in Morgan Robinson and Anaya Boyd, who transferred in from Auburn and Georgia Tech, respectively. A 5-foot-8 point guard, Robinson was ranked the No. 28 high school guard in the country by ESPN before committing to Auburn, while Boyd, a 6-foot forward, was the No. 31 overall player in the 2020 class.

Robinson decided to leave Auburn after the Tigers made a coaching change. Boyd chose to depart from Georgia Tech after a difficult freshmen season in which she battled knee and shoulder injuries.

Together, they give the Commodores a much-needed talent infusion after losing all but one player from last year's roster. They also give themselves a chance to breathe life into their own careers and get back to the Division-I level with big seasons in 2021-22.

"I think it's a big opportunity," Robinson said. "It's all depending on the way that I play. I plan on playing my best every game so that I can go where I want to go and raise my stock with coaches."

Though Robinson and Boyd both played high school basketball in Georgia, they didn't have much of a relationship before getting to Gulf Coast. Boyd did have a previous relationship with Kuhn, who tried to recruit her to St. John's back when he was a Division-I assistant coach.

"I've known coach Rory for awhile," Boyd said. "He was the only coach I actually knew who offered me. He's been recruiting me since my junior year in high school. I knew this was the best option for me. I knew he would get me back to where I wanted to be."

While Kuhn will try to get Robinson and Boyd back to the next level, they will look to get the Commodores back into national contention with their own unique skillsets.

Robinson is a talented all-around guard who can get into the paint off the dribble while also beating opponents from the perimeter with 3-pointers and pull-up jumpers. Boyd is a versatile and skilled forward who creates matchup issues with her blend of size, athleticism, and shooting ability.

"When she wants to she can be a mismatch nightmare," Kuhn said of Boyd. "She can really play (point guard through power forward) but with the ability to stretch the floor. When she's making threes she's gonna be really hard to guard.

"Morgan has really good handle, can attack the rim and put pressure on defenses and get other teams in foul trouble. She's also really capable from behind the 3-point line. With those two having played in the SEC and the ACC they should have a clue about how to play and figure out other teams' weaknesses and how to attack them. Hopefully those basketball IQs and skillsets from playing Division-I basketball transfers to the JUCO level."

Robinson said that she and Boyd both understand their roles and responsibilities as the most experienced players on the team and how much will be required of them in order to get Gulf Coast back to national prominence.

Miller said she thinks both Robinson and Boyd will play key roles in whatever success the Commodores have this season.

"I think they 'll make a really big impact because we all look up to them," she said. "They're very encouraging and they help our team a lot."

What that success looks like is yet to be determined, but Robinson is aiming high when it comes to her goals this season, both individually and as a team.

"I want to be an All-American, I want to get the highest achievement that there is," she said. "That's what I'm planning for, I just want to play great. And maybe we can go get a banner or two to put up there while we're here."