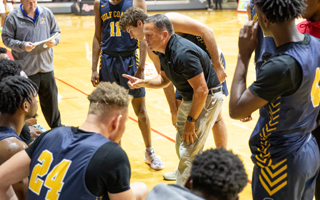 A "sophomore slump" is most commonly used in reference to players who after an impressive first-year debut experience a slip in play in their second year, or at least stagnate instead of progress to the next level.

The term could've just as easily applied to the Gulf Coast men's basketball program in Year Two under coach Phil Gaffney, who led the Commodores to 24 wins and a state championship in his first season at the helm but saw the program dip below .500 overall and in Panhandle Conference play in his second.

Of course there were plenty of excuses that could be offered with COVID pushing the season into the spring semester while limiting practice time in the fall and giving Gulf Coast just three games to prepare for the conference schedule.

Preparation for this season has been much more typical, with the Commodores getting to play a bevy of preseason games ahead of Monday's regular season opener against Florida Coastal Prep at the Billy Harrison Field House, and Gaffney and his coaching staff aren't the only ones grateful for that.

"It feels great, it feels like a normal year again," third-year sophomore guard Jammy Pierre-Louis said. "I feel like the atmosphere in here is gonna be very energetic. It honestly reminds me of my freshman year when we went so far. We went to Orlando and Tallahassee and did all those preseason things, that's what we missed last year, having a lot of experience when the season started. This year we've already played 10 games so that's good."

Pierre-Louis is one of three returning players along with 6-foot-6 forward Tay Hall and 6-foot-5 guard Trashawn Wilson, with the rest of the roster comprised of four Division-I transfers, two junior college transfers, and three incoming freshmen.

It's a longer, more athletic roster that appears much better suited to play the fast-paced full-court pressing style that Gaffney prefers and had to abandon for much of last season, with the backcourt depth provided by the additions of 6-foot-3 UNC Asheville transfer Chase Forte and 6-foot-1 freshman Tauris Watson, along with Pierre-Louis, perhaps the most crucial element that was missing last year.

"It was tough last year having only one point guard and him being banged up, which makes it hard to even practice," Gaffney said. "Now we've got depth and maybe four or five guys who can play point guard. The big thing if you want to press is that you have to have guards and we definitely have guards. If we can stay healthy we've got more than enough guards to press, but if the press isn't working we won't do it. Some games we'll just go to a halfcourt game. We'll still run but play halfcourt offense."

Halfcourt offense was a struggle last season for the Commodores, who had a tough time getting high percentage looks without the transition game. Gulf Coast hopes that the addition of 6-foot-10 Nigerian center Simeon German will help with some of that while also providing rim protection on defense and a backstop at the end of the press.

German isn't the biggest player on the Gulf Coast roster, that honor would go to 7-foot freshman Israel Torres, but he does have a chance to make the biggest impact on the interior of any big player Gaffney has recruited to GC.

"He's gonna be really, really valuable for us," Gaffney said. "I envision him starting the first game. He'll rebound the ball and is a really good shot blocker. He's athletic, he's got good moves and a high motor. You don't see a lot of 6-9, 6-10 kids with a high motor.

"I think Simeon could be an intimidator as a shot blocker and really valuable at the back end of our press. With the two-on-ones that teams get when they break our press, Simeon has been erasing those at the back end at a high rate. A guy who can get you 10-12 rebounds and clean up at the rim for everybody is huge. He's a real unselfish player, maybe too unselfish at times. But we've been blessed to have him."

The Commodores are also looking to get a big contribution from Forte, who is currently starting at point guard, as well as 6-foot-6 Valparaiso transfer Goodnews Kpegeol and 6-foot-5 Evansville transfer Alex Matthews, though the latter won't be eligible to play until December.

Pierre-Louis is the top returning Gulf Coast player after leading the team with 15.7 points per game and making 56 threes in 18 games to earn First Team All-Panhandle Conference honors.

The uber-athletic Hall will be looking to take a big sophomore leap after averaging 5.1 points and 4.6 rebounds as a freshman, while Wilson looks to build on his brief but productive freshman stint when he averaged 8.5 points and shot 41 percent from three in six games.

It's a group that Gaffney said he believes has the chance to return the Commodores to similar heights as they reached in 2019-2020, though there's still a long way to go and much improvement to be made to get there.

"No, we're optimistic. We have the talent and attitude to be a good team," he said. "Whether we're gonna realize that potential or not, I don't know, but it's there if we can just get the effort and the execution out of them. I think we'll be fine, we've just got to fight to get better every day and we have been getting better. Now, it's not fast enough for me, but maybe no coach is ever completely happy with that.

"We're trying to hold them to a new standard. We want to compete for a national championship. That's the standard and right now we're not at that standard, but we want to approach everything we do, whether it's practice, the weight room, or the classroom, with that in mind."

If the Commodores believe they're the type of team that can win a state title and make a region at the national tournament, they certainly don't have much company in that regard. Gulf Coast is unranked in the NJCAA top 25 and is tied for seventh with Polk State in the preseason state poll.

Matthews said he believes the Commodores do have what it takes to be a national contender and isn't especially concerned with the opinions of those who don't.

"I for sure think we can contend," he said. "We have shooters everywhere, we have great wings, great bigs, I definitely think we can go far, if not win it all. We do think about (not being ranked), but we know that they haven't seen our best basketball so they have no idea what they're missing out on."

Pierre-Louis said he doesn't mind the underdog role at all, and in fact relishes it, just as the Commodores did during his freshman season when they came out of nowhere to win the region.

"It's total disrespect, but I like it that way," he said. "There's nothing like exceeding expectations when people don't expect much from you. I feel like we're gonna do that again this year."

While the 2019-2020 run was more the exception than the rule for the Gulf Coast program, it was old hat for Gaffney, who had made two final four appearances at his previous stop at Georgia Highlands.

After going 5-11 in the Panhandle last season, Gaffney said he is more driven than ever to get Gulf Coast back into contention for conference, state, and national titles.

"Definitely, I'm a competitive person," he said. "I'm not overly competitive off the court, people say all the time I didn't even know you were a coach. I'm a laid back guy, pretty easy going, don't get upset about a lot of stuff. But on the court, you put a lot of time and effort into it. If we're gonna be here working our asses off we might as well win. I do want to get back.

"I definitely want us to be a top 10 team (nationally), I definitely want us to compete at state and go to the national tournament. Everything I do in my day is to try to get us to that spot. The goal is to get guys graduated, get them recruited, and try to win a national championship. That's my full focus. Last year definitely left a bad taste in my mouth, but that's over and now we've just got to move forward."