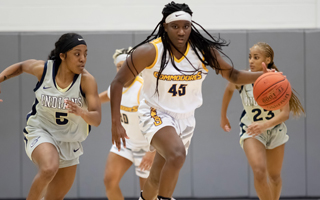 The last time the Gulf Coast women played Pensacola State, the Commodores had a six-point lead with just over a minute remaining in regulation and a golden opportunity to even their Panhandle Conference record at 1-1.

In the blink of an eye, the game was tied and the Commodores were off to overtime where they eventually lost and dropped to 0-2 in league play. Gulf Coast (17-4 overall, 2-3 in the Panhandle) has stabilized somewhat since that crushing defeat, and the Commodores will get a chance for some redemption when they host the No. 9 Pirates (15-1, 3-0) on Saturday at the Billy Harrison Field House.

"I don't think we've particularly had it on our radar or anything," Gulf Coast coach Rory Kuhn said of the rematch. "We know the last time we kind of gave the game away. We know what we've got to do. It's about learning from your mistakes. We've got two kids on our team that had played college basketball before this year. All these other teams were returning kids that had played together for two years or at least one year.

"Me getting here so late and putting this team together so late and having only those two kids who played college basketball, those are the game experiences of playing in pressure situations that we've got to learn from. Getting in those end of game situations kids act different ways. We didn't do what we needed to do, but we're growing and getting better and I hope we don't make the same mistakes twice. I hope we do what we need to do offensively and defensively to come out with a win."

If Gulf Coast does that then it could find itself back in the mix for the second spot in the league standings very quickly with the Pirates set to play two games against No. 1 Northwest Florida State (18-0, 4-0) in the next week.

It was the Raiders who dealt the Commodores their most recent defeat, 69-63 on Wednesday in Niceville. Gulf Coast was without two key players in starter and third-leading scorer Ciante Downs and reserve guard Taylor Jarrels due to injuries that Kuhn said may keep them out of Saturday's game as well.

If they can't go, it puts a further strain on the Commodores' already tenuous depth, and it comes as the team finishes a difficult stretch of four games in seven days.

"It's gonna be difficult," Kuhn said. "More than anything it's just being able to get some rest and some minutes for other kids. It's a lot, especially now. In a normal week it might be OK, but not when you're doing four games in seven days. That's the tough part with this short, compressed stretch of games. There's not much time for rest, so we'll have to gut it out and get through it."

Second-place, however, appears far more up for grabs than it did before the start of conference play, with No. 11 Chipola (18-4, 3-2) just a half game up on the Commodores, who have the early head-to-head advantage after beating the Indians 79-74 on Monday.

Gulf Coast already has one win this season over the Pirates (9-11, 0-4) in Pensacola 81-68 on Jan. 6 and getting another one in Saturday's home rematch is essential if the Commodores are serious about contending for one of the top two spots in the league standings and ensuring a spot in the state tournament.

"We have to, we have to win the next two," Gulf Coast coach Phil Gaffney said of his team's upcoming games against the Pirates and Tallahassee (17-6, 1-3) on Jan. 29. "Those are must-win games. You have to beat those teams, no doubt about it. We want to get to the state tournament for the third straight year and I think this year we can do some stuff if we get there.

"Obviously, Northwest is very, very good, but I think anybody can be beaten this year. I don't think there's a dominant team. I think anybody can possibly be beat. We've seen all the top teams (in the state) this year. We've played everybody so we kind of know them. We feel like we've just got to keep getting better and hopefully start getting some guys back healthy."

The Commodores have not had their full team together at the same time all season, with wing transfers Alex Matthews and Goodnews Kpegeol not playing in the first semester due to eligibility or injury, while an ankle injury to starting power forward Tay Hall and a recent COVID outbreak among the team limiting the Commodores even further.

Hall will again be out Saturday and his return remains questionable and his absence very noticeable, as Gulf Coast has been outrebounded by 20 or more rebounds in each of the last two games.

On the bright side, starting shooting guard Jammy Pierre-Louis, who was battling through an ankle injury of his own early in league play, has started to catch fire of late, scoring 24 and 22 points in his last two outings while making 12 of 22 from the 3-point line.

The sophomore sharpshooter regaining his stroke comes at just the right time for the Commodores, though Gaffney said it would be nice if some of his teammates would join the 3-point parade as well.

"Jammy is heating up, he's playing the way we anticipated him to play, which is great," Gaffney said. "We're pretty happy that he's back, but in terms of 3-point shooting nobody else is shooting it at all. In the last two games, everyone other than Jammy is shooting 6 of 33 (from three), which is atrocious.

"Between the 3-point shooting and the terrible free throw shooting, there are a lot of things we can get better at and improve on. If we can fight to get to that second or third place spot in the Panhandle, we're hoping by the end of February that we can be a really tough team to beat."