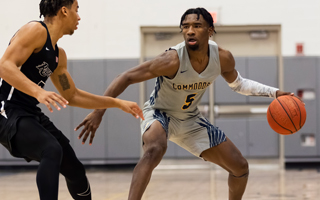 The Gulf Coast men's and women's basketball teams split a pair of road games at Pensacola on Wednesday night, with women falling 68-64 to the Pirates before the men notched an 89-73 win.

Both Commodore teams are now at 5-5 in the Panhandle Conference with two league contests remaining. Tai'Sheka Porchia led Tallahassee in the women's game with 29 points, followed by Caliana Fenceroy with 14 points, with Zahra Daniel and Aniyah Brown adding nine points each.

Morgan Robinson-Nwagwu was the top scorer for the Commodores with 25 points, with Imani Smith scoring 17 points, and Ciante Downs seven points.

The win puts the Pirates (5-4) back into third place with three games remaining against Tallahassee, Chipola, and Northwest Florida State. Gulf Coast, which finishes the season with games against Chiplola and Tallahassee, will now need some help to finish in the top three.

In the men's game, Gulf Coast came up with one of its best offensive performances of the season in a game it had to have, shooting 57.1 percent from the field, making 10 of 21 from the 3-point line, and converting an uncharacteristically good 78.9 percent of its free throws.

Tauris Watson was the top scorer for the Commodores with 22 points, with Chase Forte adding 12 points and nine assists, and Trashawn Wilson and Kyle Murphy scoring 11 points each on a combined 5 of 9 from the 3-point line. Alex Matthews added nine points, five rebounds, and four assists.

Truth Harris led the Pirates (1-8) with 18 points, followed by Zondrick Garrett with 17 points, Jarvell Gainey with 16 points, and D'Anthony Pennington with 11 points.