Gulf Coast men, women both get key players back vs. Tallahassee 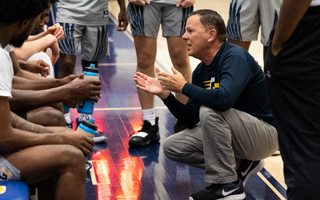 In Gulf Coast's first meeting with Tallahassee on Jan. 15, the Commodores gave up an eight-point halftime lead en route to a 67-65 road loss.

The Commodores (14-8 overall, 3-3 in the Panhandle Conference) have won two of three games since then, and if they have serious designs on grabbing one of the top three spots in the league standings and a berth in the state tournament, they can't afford a similar effort in Saturday's rematch at the Billy Harrison Field House.

A win Saturday would put the Commodores two games clear of the Eagles (17-7, 2-4) with five conference games to play. While it is certainly not a must-win game for Gulf Coast, it is a game that could have a significant say in who ends up playing on into the postseason.

However, Gulf Coast coach Phil Gaffney said that he and his players have bigger ambitions than simply sneaking their way into state.

"We've played all (the top teams in the state) and have never been at full strength and played with all of our players yet," he said. "I think if we're at full strength we can win state, but we've got to get there first. That's why these games mean a lot.

"But I'm not just trying to beat Tallahassee, I'm trying to go on a winning streak. We had a 56-game winning streak when I was at Georgia Highlands and what can happen is one insignificant victory can start it off, but we have to get going. I don't want to just win one game here, let's go on an eight-game, nine-, 10-game winning streak. Let's go win state and get a bunch of momentum going into the national  tournament. Let's show that we're a really good team and get on fire at the right time of the year in February and March."

The return of Tay Hall
The Commodores are set to get a boost with the return of starting power forward Tay Hall, who has missed five of six conference games due to an ankle injury.

Gulf Coast's Tay Hall (5) goes up for a shot during a game against USC-Salkehatchie on Nov. 5, 2021 in Niceville.
His absence has been acutely felt, particularly on the boards, with Gulf Coast getting outrebounded by an averaged of 14 per game in conference play. The return of the springy 6-foot-6 sophomore should go a long way towards helping the Commodores close that gap.

"He's our best rebounder and a really good offensive rebounder," Gaffney said of Hall. "We don't get a whole lot of points on the offensive glass when he's not there, practically none. You've got to go get six or eight hustle points on second chances and we haven't really been able to do that.

"We need him for sure to come in and help us out with that, but he's also a really good defender along with being a good rebounder and a good finisher in terms of dunking. We don't really get too many dunks now, Tauris (Watson) is really the only one who dunks except for maybe Chase (Forte) sometimes. Hopefully Tay will come in and finish for us and block some shots and get some rebounds."

Free throw woes
One area Hall won't provide much relief is at the free throw where he shoots 55.3 percent for the season.

He has plenty of company when it comes to free throw futility, with the Commodores shooting just 58.1 percent from the line for the season and 53.3 percent in Panhandle play.

Gulf Coast is just 24 of 49 from the foul line in its last three games, somehow managing to win two of three in spite of those struggles.

"It's horrible, but we've been working on some things with the guys," Gaffney said. "I think it's gonna get a lot better, or at least I hope it will. All you can do is work on it and work on it in a lot of different ways. It's got to get better, but it can't get a lot worse."

Gaffney said that the Commodores have used this week to work on improving their poor free throw shooting, increasing their volume of attempts at practice while also creating pressure situations within practices by tying makes to running or getting to end practice early.

Ultimately, however, Gaffney said the problem the players face in the games when it comes to making free throws is much more mental than physical.

"Absolutey, that's 100 percent right," he said. "That's exactly what happens. You start to think about it and in the last three or four or five minutes of the game it's like you've got to be perfect. You can't be missing them in those situations and we have. When the pressure is on that's when you've got to shoot your best from the three and the free throw line and we haven't.

Taking nothing for granted
On the women's side, the Commodores (14-7, 3-3) face on paper what should be a somewhat easier task in an Eagles (3-19, 0-6) team that is still searching for its first conference victory.

With Chipola (4-3) and Pensacola State (3-3) both tied for second in the loss column, it's a game Gulf Coast can't afford to give away if it wants to earn a top three spot in the league standings.

The Commodores won the first meeting 72-60 in Tallahassee on Jan. 15, but they had to rally back from a 35-31 halftime deficit, so Gulf Coast coach Rory Kuhn said he has had no trouble convincing his players that the Eagles pose a very real threat.

"It's like I've said before with Tally, even though they haven't won a game, you can't fall asleep," he said. "I think our focus is where it needs to be right now. When we went there last time we were down at halftime, so I don't think the girls will take them lightly. You fall asleep in this conference you can lose to anyone. But the way we've been practicing everybody has been locked in and doing what they need to do. Hopefully we'll come out on Saturday and take care of business."

A boost from Boyd
Gulf Coast is coming off of one of its best and most important wins of the season a week earlier, knocking off then-No. 9 Pensacola State 72-62 at home.

The win was even more impressive considering it came without the services of sophomore forward and second-leading scorer Anaya Boyd, who was a late scratch due to a knee injury she suffered in the previous outing against Northwest Florida State.

Boyd is set to return on Saturday and it will be a welcome addition, with the 6-foot Georgia Tech transfer averaging 15 points per game in conference play, including a 24-point, seven-rebound effort in a 76-67 win over Chipola on Jan. 17.

"She's our second leading scorer and she's just kind of an anchor and a leader and a steady, calming influence when she's out on the floor," Kuhn said of Boyd. "Having her back would be huge. I'm proud of the girls who stepped up and beat Pensacola without her. It was great to see other people stepping up like Ciante Downs and Abby Cracknell and Imani Smith when she was out, but having her back is huge and helps us out in every possible way."