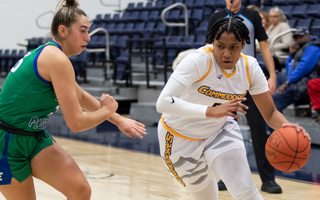 Through his first 15 games as Gulf Coast coach, Rory Kuhn has faced nearly as many nationally-ranked opponents (seven) as not, as the No. 19 Commodores have navigated their way through a difficult pre-conference schedule with a respectable 11-4 record.

On Tuesday night at the Billy Harrison Field House, Kuhn gets his first taste of Panhandle Conference basketball as a head coach and it will be a trial by fire as the Commodores welcome in the No. 1 team in the country in undefeated Northwest Florida State (14-0).

Kuhn is certainly familiar with the Panhandle Conference having been a former assistant for the Northwest Florida State men's program, and he knows just how meaningful it is to play the nation's No. 1 team on your home floor.

"If you don't get excited for this kind of game I don't know what gets you excited," Kuhn said. "You've got the No. 1 team in the country coming into your place, obviously they're pretty damn good. They haven't lost a game this season for a reason. They're the defending national champs and they've got almost everybody back from that team, so it's a big challenge.

"But this is why players come to this conference, they want to be challenged by the best and we just happen to be the lucky ones who get to play the best team in the country right off the bat. We'll be up for the challenge, we'll take our swings and do the best we can."

The Commodores playing against high quality teams
The Commodores have had plenty of practice playing against high quality teams this season, playing seven games against teams currently ranked in the NJCAA top 25 and three games against teams in the top 10, most recently losing to No. 7 Georgia Highlands 80-75 and No. 16 South Georgia Tech 88-85 in overtime last week in Americus, Ga.

Gulf Coast would like to have a better record (3-4) than it does in such games against nationally-ranked teams, though the Commodores have been outscored by just two points over those seven outings, which Kuhn said illustrates that his team is capable of playing with and beating anyone on the schedule on any given night.

That's pretty significant given that the Panhandle Conference contains four of the top 19 ranked teams in the country, including the top two in Northwest Florida State and Chipola.

"There isn't another conference in the country where out of five teams you've got four in the top 20," Kuhn said. "Five of the last six national champions came from the Panhandle Conference. But we have to look at the conference as a brand-new season. We're 0-0, everybody is 0-0, so what we do now is what matters going forward.

"I feel like we've done enough in the non-conference with the schedule we've played, all our losses are to nationally-ranked teams, we just have to handle some business now here in the Panhandle, but we feel like we're just as good as anyone in the country."

That idea will be put to the test against a deep and experienced Raiders club that brings back seven players from last year's national championship team led by sophomore guard Last-Tear Poa, who leads Northwest with 13.2 points per game along with 4.5 rebounds and 3.2 assists per contest.

Of greater concern to Gulf Coast is the Raiders' stifling defense, which has limited opponents to just 41 points per game this season on 28 percent shooting from the field and 24 percent from the 3-point line.

That defense will be put to the test by one of the nation's top scorers in Gulf Coast sophomore guard Morgan Robinson, who is sixth in the country in points per game at 20.3. Robinson hasn't shot the ball particularly well from deep at just 28 percent, but she ranks as one of the best players in the country at getting to the foul line at 7.2 attempts per game and is making 82.4 percent of her attempts when she gets there.

Robinson has scored 20 or more points in eight of her 15 games this season and the Commodores will likely need another big performance from her in order to win Tuesday.

"Obviously she's giving us a big scoring punch," Kuhn said of Robinson. "I know she's gonna score the ball, but to me the most important thing is her defense and rebounding. That gives her another dimension when she gets going on that end. Clearly she's a talented player who can score the ball, hopefully she keeps doing what she's doing and we can get better and better."