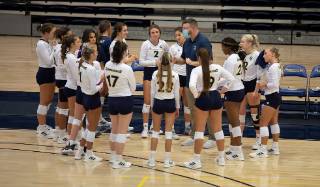 The first three weeks of the season for Gulf Coast didn't go exactly as the Commodores planned. They played just four matches in that span, with three postponed due to COVID, and won just once in sweeping Florida Gateway College to avoid an 0-3 start in the Sun-Lakes Conference.

There's reason for hope, however, following a 3-0 weekend that got Gulf Coast (4-3) back over .500 for the season and into the all-important sixth position in the league standings.

Gulf Coast took a 3-2 win over St. Petersburg College and a 3-0 sweep of Pasco-Hernando State to move to 3-2 in the conference, and then finished the weekend with a 3-1 victory over Division-I Eastern Florida State.

Commodores coach Scott Allen called the performance against Eastern Florida State the best for his team this season and an important one ahead of Wednesday's road matchup with Pensacola State, which is in its first year in Division-II and sits just a half-game back of the top of the Sun-Lakes standings at 4-1.

"We probably would've been happy against a roster like Eastern Florida if we could take a set off of them and play well but maybe lose in four," Allen said. "We'd probably have counted that as a pretty good match. We're really happy with that win. That's probably the strongest club we've played against and probably the cleanest match that we've played.

"I think Pensacola will be pretty close to that level, so it's gonna be tough. Pensacola has a strong club. Coming down from Division-I, I think it's gonna be a really good match. I wouldn't be surprised by any outcome."

Gulf Coast and Pensacola forged a pretty intense rivalry back in their days as Panhandle Conference mates, though it has lost some of its luster in recent years after the Commodores moved to Division-II.

With the match once again accompanied by conference and postseason stakes, Allen said the rivalry has taken on a different feel and tone.

The Commodores will follow Wednesday's match with two more on the road this weekend against Palm Beach State and South Florida State. Winning all three or even two of those matches would go a long way to helping Gulf Coast get closer to securing a spot in the conference tournament on Nov. 5-6.

While conference tourney spots were once guaranteed when the Sun-Lakes was a six-team league, the addition of Pensacola State, St. Petersburg, Palm Beach State, and Florida State College of Jacksonville has changed the qualifications for entry and now only the top six teams will make the double elimination tournament.

Allen said the addition of the four Division-I teams has made it tough on the clubs more settled into Division-II play, but that it will ultimately even out from a competition standpoint.

"I think it's great, but it's a bit of an adjustment," he said. "What makes it difficult is having so many holdover athletes who were Division-I caliber and now they drop to Division-II and several of them end up staying in those programs so the rosters are stronger than what they may be two years down the road when everybody is coming in understanding that it's Division-II and they're only getting Division-II benefits.

"It's what we saw at the beginning of the Sun-Lakes Conference, some teams that had some pretty strong rosters with 6-2 outside (hitters) from Germany staying around for one more year that really made it hard for the Gulf Coast roster to handle. Over the last few years the rosters have kind of leveled out and now you don't see that type of thing."

Despite the influx of Division-I teams and the loss of starting setter Peyton Chambers to injury, Gulf Coast remains very much in the mix for a postseason berth thanks to a wide range of contributions from young players.

Freshmen Carsyn Tillman and Morgan Brice have picked up the playmaking slack left by Chambers' absence, with Tillman leading with 147 assists followed by Brice with 115. Freshman Sarah Duckett leads with 88 kills and 19 blocks, followed by Sarah Shuler and Reece Rhodes with 50 kills each.

Rhodes narrowly trails fellow freshman Jensen Diggs for the team lead in digs with 116, with Diggs leading with 119.

Allen said that last weekend's victories in particular have given the Commodores the belief that they can compete with anybody in the league.

"This last week was really big for us," he said. "I think we have the roster, the talent to be able to compete. It's just about finding the right balance and getting everybody into the right spots and right positions and then just playing better. This last week I wanted to see how we were progressing and to come out and get three wins against three pretty good clubs, it was like, OK, we can definitely compete with the upper end of this conference.

"Now I think the girls can see that too and they're playing with a little more belief and understanding of what's in front of us and what we can actually do. If we had gone 0-3 last weekend it would be a huge hole to get out of. I think we gave ourselves some more breathing room to progress. I think we can definitely move up and be one of those top few teams in the league for one of those high seeds."