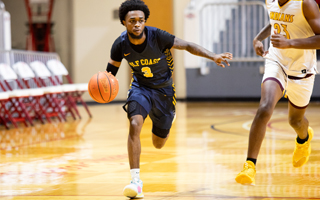 The sophomore season for Gulf Coast guard Jammy Pierre-Louis saw the kind of jump in production that one would hope for from a player in his second year of college basketball.

After playing a bench role for the 2019-2020 Commodores team that won the state title and advanced to the national tournament, the 5-foot-11 shooting specialist moved into the starting lineup last year and saw his scoring average go up from 7.1 per game to 15.2, earning First Team All-Panhandle Conference honors for his efforts.

But while Pierre-Louis' hard work and improvement paid off in production, it didn't result in any Division-I scholarship offers. There were Division-II schools who came calling, but the Delray Beach native had higher ambitions, and with the extra year of eligibility available due to COVID, Pierre-Louis decided to take on the rarest designation in JUCO sports: a third-year player.

Commodore Jammy Pierre-Louis smiles during practice sprints. Gulf Coast State College practiced at their home gym Monday, October 25, 2021.
"Basically I felt like I was very under recruited because of COVID," Pierre-Louis said. "My goal was to go to D-I and a lot of schools weren't able to come out last year to see me. I had a lot of good D-II (offers), but I didn't want to settle. It was like, I've got a year back anyway, so why not use that? D-II will still be there, but this was another opportunity to chase my dreams and put a banner up and try to go to nationals."

While COVID travel restrictions may have played a part in the lack of activity around Pierre-Louis' recruitment, it wasn't the only factor.

A prolific 3-point shooter, Pierre-Louis has made 39 percent of his threes at Gulf Coast (105 of 269) on over five attempts per game. It's a skill that every college team covets, but at just under 6 feet tall, Pierre-Louis was small to be a shooting guard, as he was primarily used, and hadn't displayed the ball handling and playmaking skills that would allow him to be viewed as a point guard prospect at the Division-I level.

it was a realization that Pierre-Louis had to confront and he spent much of the off season working to address the issue.

"I've always been a great 3-point shooter and obviously teams need that," he said. "I can shoot the ball really well, but it hurt my recruitment that I was technically an undersized shooting guard. In reality I know I can play the point guard, they just didn't need me to play point guard. This year I've been working all summer on point guard skills so I can be a combo guard, and I think that can definitely help my recruiting."

Hard work is nothing new for Pierre-Louis, and Gulf Coast coach Phil Gaffney said it would not be surprising to see him take another step forward as a player after what he did last season.

"Jammy's first year his role was just a shooter off the bench, last year he was a much better player, a better ball handler and defender," Gaffney said. "He took a big leap and not everyone does that. He got a lot better and now we're asking him to take a much bigger role handling the ball.

"Point guard is a whole different animal, point guard is a mindset. It's the hardest position to play, you're the quarterback on offense and defense so you've got to talk and tell everybody where to go and where to be. It's much harder. But he came up this summer when we had a six-week summer class and did a great job working point guard."

It's the mental approach that Pierre-Louis said has been the biggest adjustment to playing more on the ball, such as learning how to use his skills as a shooter and scorer to be a more effective playmaker and make his teammates better.

"For me, I'm a natural scorer, but because I'm a good scorer it allows me to get assists and get my teammates open because when I'm coming over a screen they don't want me to shoot the ball, so guys will be open and I can be more effective that way than being on the wing and getting denied and double teamed," he said.

"Being on the ball now, I can still shoot and I can make good decisions. It's just about getting the ball handling a little tighter, but more so my decision making like when to jump stop or bounce pass, when to throw the lob, when to kick out, what's a good shot. I feel like it's something I'll get better at throughout the year."

Though Pierre-Louis will have the ball in his hands much more this season, it's UNC-Asheville transfer Chase Forte who is officially the Commodores' starting point guard. The two will share the backcourt and the ball-handling duties, and Pierre-Louis said they've already developed a good chemistry and are making each other better, more well-rounded players.

However the roles and responsibilities in the Gulf Coast backcourt shake out over the course of the season, Pierre-Louis made it clear that he's committed to putting everything he has into his final season as a Commodore.

"This is honestly my all-in year," he said. "Before I decided to come back I said I've got to go all in this year. Last year, I think I left a little bit in the tank, holding off just in case we go to Hutch. This year I'm leaving everything on the court."