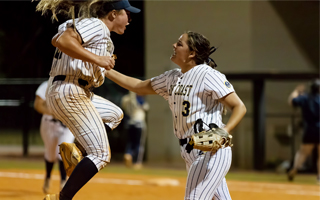 Gulf Coast split a pair of games with Chipola on Tuesday evening at Joe Tom King Field, dropping the first game 5-2 before salvaging the split with a 4-2 victory in the second game.

Chipola used a five-run sixth inning to take control in the first game, getting an RBI single by Sierra Jevyak and a grand slam by Kamari Strozier to go in front 5-1.

Cassidy Boltz led the Commodores offensively, going 2 for 4 with a home run. Emily Greek also had an RBI double. Janelle Martinez was 2 for 4 with a double and a run for the Indians.

In the second game it was the Commodores who came up with the big hits late, as a two-RBI double by Greek and an RBI single by Boltz gave Gulf Coast a three-run fifth inning to take the 4-1 lead.

Jadyn Burney got a run back for Chipola with an RBI single in the top of the sixth, but Gulf Coast reliever Savana Bradford worked around a lead-off double and a two-out walk in the top of the seventh by getting McBurrows to pop out to shortstop for the final out.

Bradford earned the save for recording the final five outs and allowing two hits, while Savanna Wood got the win for going 5 1/3 innings and giving up two earrned runs on three hits and and a walk with three strikeouts.

Landyn McAnnally took the loss for the Indians, starting and surrendering four runs, though only one earned, on six hits with five strikeouts in 4 2/3 innings.

Greek went 3 for 3 with two doubles, two runs, and two RBI, while Jabby Terrell had two hits and Morgan Rhoden had a double and an RBI. Marley Sims had two doubles and scored two runs to lead Chipola. Gulf Coast will be back in action on Friday with another doubleheader against Northwest Florida State in Niceville. Chipola will be home Friday for two games against Pensacola State.