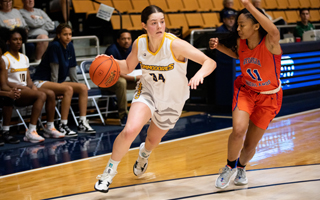 The Gulf Coast men's and women's basketball teams were again on the road this weekend, with the women winning a pair of games in Marianna and the Commodore men taking their first loss of the season in St. Petersburg.

Gulf Coast's women competed at the World Exposure Report Invitational at Chipola and took down No. 9 Georgia Highlands 85-77 on Friday before winning again Saturday 94-39 over Seward Community College.

Morgan Robinson had 22 points and seven rebounds in Friday's win, with Abbey Cracknell adding 18 points and Anaya Boyd 16 points. Robinson was again the top scorer on Saturday with 20 points, with Ciante Downs adding 17 points, followed by Taylor Jarrels with 11 points, Imani Smith and Jaliyah McCain with 10 points each, and nine points each from Ava Miller and Boyd.

Gulf Coast (3-1) will be back on the road next weekend with two games in the Tallahassee Classic against Miami Dade and Monroe Community College.

The Commodore men notched an 89-79 victory over Daytona State on Friday, but ended the weekend by falling to Polk State 79-70 to fall to 4-1. Chase Forte led Gulf Coast on Saturday with 20 points, followed by Jammy Pierre-Louis with 18 points, and Simeon German with 11 points.

Gulf Coast will be back in action on Wednesday with a road game against Central Georgia Tech in Macon, Ga.