What we learned: 3 takeaways from the Commodores' 79-67 loss to No. 4 Northwest 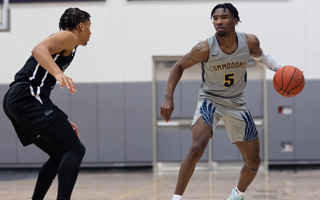 PANAMA CITY — Through one half of play, it appeared as though Gulf Coast might have something special in store for the fans in attendance at the Billy Harrison Field House who showed up hoping to see an upset of No. 4 Northwest Florida State.

In the second half, the Raiders put a quick end to any such notion and cruised to a 79-67 victory on Tuesday night in the Panhandle Conference opener for both teams.

"It was an absolutely horrible second half," Gulf Coast coach Phil Gaffney said. "All the turnovers, just unforced, it was a disaster. I've never seen anything like it in my life. I don't know why we didn't do better. It was terrible, just awful. We have to figure it out because we did a terrible job."

Tre Clark scored 22 points to lead the Raiders, while Michael Jefferson added 12 points, Shammah Scott nine points, and Kam Woods and Deshawndre Washington eight points each. Tauris Watson was the only bright spot for the Commodores with 24 points on 8 of 14 shooting from the field, with Chase Forte the only other player in double figures with 10 points.

Gulf Coast will next play at Pensacola State on Thursday, while Northwest will host No. 6 Chipola on Thursday.

"I think the big thing we've got to do it forget it, put this one in the rearview," Gaffney said. "We've got Pensacola on Thursday so we've got to go try to steal one on the road."

Turnovers, turnovers, turnovers
There was no real mystery around the way in which the Raiders pulled away in a second half in which they outscored the Commodores 47-33. Gulf Coast was simply unable to protect the basketball on offense, which led to an avalanche of transition baskets from Northwest that resulted in the Raiders shooting 65 percent from the field in the second half, including 15 of 18 on two-point shots.

"That's the problem was that our turnovers led to their offense," Gaffney said. "Give them credit for their good defense, but we have to say what's going on here that we can't handle the basketball and just constantly turn it over. Their defense was their offense.

The Commodores turned the ball over 21 times for the game, a number that Gaffney said he thought was lower than the actual total, while assisting on only nine of the team's 23 made field goals.

Of course it wasn't only turnovers that were costly for the Commodores in the loss. Free throw shooting, as it has been all season, remains a thorn in Gaffney's and Gulf Coast's side.

Gulf Coast converted just 19 of 32 shots from the charity stripe, missing more free throws than the final margin. It has been an area of concern all year for the Commodores, who have hovered around 60 percent from the free throw line for much of the season.

The problem has only gotten worse of late, with Gulf Coast converting just 37 of 68 (54.4 percent) from the line in its last three games, two of them losses.

Not the real JPL
It didn't help the Commodores' cause that they were pretty banged going into Tuesday's game. Starting power forward Tay Hall missed the game and will miss Thursday's contest against Pensacola State as well with a sprained ankle, while starting shooting guard Jammy Pierre-Louis suffered an ankle injury of his own in the final non-conference outing against Georgia Highlands.

The third-leading scorer on the team and the Commodores' top 3-point threat, Pierre-Louis played on Thursday but did not start and did not look like his usual self, taking just two shots, both 3-point misses, in only 18 minutes of action off the bench.

"Obviously that's not a First Team All-Panhandle player," Gaffney said. "Maybe we shouldn't have played him against Georgia Highlands or not played him tonight, I don't know. We talked to him and talked to the trainer, we're just trying to figure it out, but he's obviously not himself. He's a 16 points per game scorer for us last year and a great all-around player and it's missing."