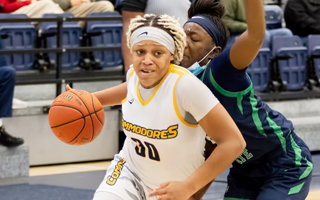 PANAMA CITY — Leading by six points with just over a minute to play in regulation of Saturday's Panhandle Conference game against No. 9 Pensacola State, Gulf Coast coach Rory Kuhn couldn't help but experience a bit of déjà vu.

It was only a couple of weeks earlier that the Commodores blew a 65-59 lead with a minute left and possession against the Pirates, who rallied back to tie it up on a Kristin Williams 3-pointer before going on to win in overtime.

In the rematch at the Billy Harrison Field House, Gulf Coast made sure there would be no repeat of that Jan. 6 collapse in Pensacola.

"I literally told them, 'we've been here before,'" Kuhn said when his team was leading 66-60 with 1:26 remaining. "Let's not make the same mistakes, and to their credit they didn't and we closed the deal out. (In the previous game) we turned it over last time and took (their last shot before the tying three by Williams) so early, but it's like I've said, with the exception of Anaya (Boyd) and Morgan (Robinson), they're the only two kids on our team who have played college basketball, and now those freshmen are starting to grow up a bit and becoming more comfortable."

The 72-62 victory improves the Commodores to 18-4 overall and evens up their Panhandle Conference record at 3-3. It was the first league loss of the season for the Pirates, who dropped to 3-1 and 15-2 overall.

The Commodores will get a week to rest and regroup before hosting winless Tallahassee (0-5) on Saturday and could climb further up the league standings in the meantime, as the Pirates have games against Northwest Florida State (4-1) and Chipola (3-3) on Monday and Wednesday before playing the first-place Raiders again on Saturday.

Next person up
Just as they did in Wednesday's 69-63 road loss to Northwest Florida State when they were missing two rotation players in Ciante Downs and Taylor Jarrels, the Commodores on Saturday were again short-handed.

Starting power forward and second-leading scorer Anaya Boyd, who had been averaging 15 points per game in conference games, was a late scratch with a knee injury that she suffered on Wednesday.

Downs and Jarrel did return, with Downs contributing eight points and five rebounds in 37 minutes, while Imani Smith stepped into the role of No. 2 scorer in Boyd's absence with 15 points in 32 minutes.

"Everything is just crazy, we're short-handed again, Ciante is playing on one foot out there ... we just said 'next person up,'" Kuhn said. "Jaliyah (McCain) came in the game and got a huge bucket and a steal, just plays like that, (Musharapha Alhassan) was playing well, and Imani has been growing up and getting better and better, and obviously Morgan carried us down the stretch.

"But that's a great win for us, being down one starter and a kid on one foot, beating the No. 9 team in the country, I'll take it."

Robinson closes the show
While Gulf Coast got contributions from a variety of players on Saturday, it was the Commodores' sophomore star Robinson who they rode down the stretch.

Robinson scored nine of her game-high 26 points – she also finished with nine rebounds and six assists – in the final 3:26 of play, making a pair of clutch baskets and converting 5 of 6 free throws, finishing the night 12 of 14 from the charity stripe.

Robinson rebounded and put back her own miss to make it 63-57 with 2:58 to go and later scored on a pretty reverse layup with 1:30 on the clock to give Gulf Coast a seven-point lead. The Auburn transfer then helped salt the game away with four straight free throws in the last 31.5 seconds.

"She was our closer tonight," Kuhn said. "She made that great baseline drive, she got fouled on another one, closed it out with the free throws, she was going to get the ball. The last couple of games I was yelling at her, 'hey, the ball needs to be in your hands at the end, you need to take this over,' and to her credit that's what she did today."

Big lift from the biggest player
With Boyd out of the game due to injury and starting center Ava Miller limited to just 12 minutes due to foul trouble, Gulf Coast was desperately in need of some quality frontcourt minutes.

The Commodores got just that from an unlikely source in Musharapha Alhassan, who had only scored in one of her first five conference games, scoring six points against Chipola.

On Saturday, Alhassan scored seven points, grabbed 13 rebounds, including five offensive rebounds, and blocked two shots. She made things tough on the Pirates' top post player and second-leading scorer Tai'Sheka Porchia, who made just 3 of 10 shots from the field.

Alhassan also had her moments offensively in the fourth quarter, grabbing an offensive rebound and putting it back in to make it 60-54 Gulf Coast with 4:42 remaining, and then going high to catch a lob pass from Smith and scoring again to make it a three-possession game at 68-60 with a minute to play.

"She gave us a big lift," Kuhn said. "She was rebounding, if she wasn't blocking shots she did a great job of just walling up, she did a great job. She got a huge bucket at the end where Imani threw it over the top that gave us a little space there, she was just great for us today."